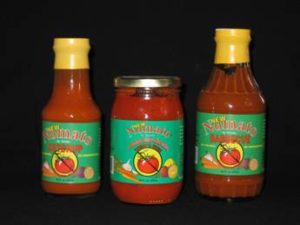 Once upon a time there was a little girl named Hannah (My granddaughter).

Hannah was allergic to tomatoes;

She could not eat tomatoes, pasta sauces, pizza, and ketchup or any food or recipe containing tomatoes.

Her food choices were very limited.

And as time went by her grandmother (me) began experimenting with various vegetables and seasonings and created:

· Nomato® – a tomato free sauce.
Later I created a ketchup and barbecue sauce

Today Hannah has more variety in her meals because she can have:

· Nomato® Barbecue Chicken
And many other dishes.

Hannah lived happily ever after!